Erjon Vuçaj has followed the first European match against Rudar Velenje together with Laska president in the VIP stadium “Arena” in Celje, Slovenia. He has not played due to the r 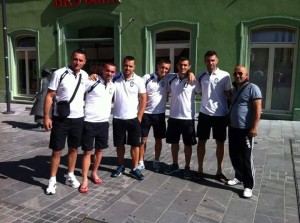 ed card that has taken in Luxembourg to Diferdanzh 03. However, the next challenge he will be in the lineup Nice. In a statement to “Sport Express” 23-year-old said he is happy to teammates who received a positive result in Slovenia, but calls have another match to play. “We have equated the sidelines and goal in this case is worth a lot. In the first challenge we were not teams that are shown during the championship, but the match pressure led to his teammates. In the second half everything changed, and I think should have won the match. A penalty and a goal denied there are few for a team. However, the end goal of the match has given us more confidence. The next challenge of playing in our field, in front of our avid fans. Maximum support from the fans want to move forward in Europe. I urge you to support us, but be careful with hard objects because Europe has strict rules and penalize us. Let’s turn it into a holiday this match. We have the utmost confidence that we will win the meeting. The team is now more relaxed and has a lot more confidence. Also experience in Europe now is not small for us, but we must pass the first round. Opportunities are all real. Lac is a team that is playing at a high level for years and that the facts show. Three participation in the European Cup and Albania are few. Now we must also pass at least one tour in Europa League. In terms of the future will be decided after European matches. I reiterate my desire is to play abroad and this is my first option